Figline Valdarno: What to Visit 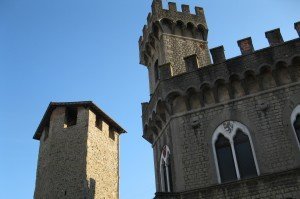 In the heart of Tuscany, between the provinces of Siena, Florence, and Arezzo, and in the Upper Valdarno area it is located Figline Valdarno. From 1st January of 2014, the municipality of Figline became the municipality of “Figline e Incisa Valdarno”.

The historical origins of Figline date back to 1000. During that period, from the castle of Fegghine located in the area of San Romolo, the population came down to the valley to create a kind of market. As time passed, this settlement continued to grow until it became a small town.

Even today, the structure of the central square of Figline, a square named after “Marsilio Ficino”, is very similar to a market place. A square designed specifically to facilitate the commerce. Even today, the market is held in this square on Tuesday. There are also many religious and civil buildings that are worth a visit.

The “Collegiata di Santa Maria” is a church built by the Florentines in the second half of 1200, and has been amended and retouched, so that today has virtually nothing more about that gothic aspect by which it was designed.

On the inside there is the great altarpiece of Figline master. It is a spired table representing the Madonna seated on a throne with the baby in her arms, surrounded by angels, while at the bottom there are St. Louis of Toulouse and Saint Elizabeth of Hungary.

It is the most important piece kept inside the church, but there is also another artistic heritage that deserves a mention: the chapel of “Santissimo Sacramento” of the nineteenth century, where there is a baptismal font of the sixteenth century, and a statue of terracotta depicting Saint Joseph, created by Andrea della Robbia.

In “Piazza Bianchi” it is located the “Palazzo Pretorio“. The building dates back to the fourteenth century, although the last renovation took place in 1924 (which ended in 1931) by the architect Enzo Cerpi.

On the facades of the building follow one after the other the different coats of arms of the Podesta who have alternated over the years. A long time ago, on the crenellated tower, and today in the entrance hall of the palace, there is the bell of 1300. It was used to call the population for the village meeting.

Always on the bell, there is an inscription which says: “Ad perpetuam destructionem et mortem totius partis ghibelline”. It is a celebration of a defeat by the Ghibellines. Because of land subsidence, today the ancient crenellated tower sloping conspicuously.

The Gothic church of St.Francis

The Gothic Church and the convent of St.Francis are in “Piazza Morelli“. The church was built between the thirteenth and fourteenth century. On the facades, today are still visible the signs of black and white duotone typical of the period. The light granite stones are alternated with green marble, creating a play of colours of which remain a few traces. The church, preceded by a Renaissance portico, houses masterpieces of great value. In particular, the frescoes of the Crucifixion with Saints attributed to Francesco d’Antonio, and dated back to the beginning of 1400, the fresco of the Madonna who gives Girdle to St. Thomas from the late fifteenth century; and finally the work that represents the mercy of Christ between Saints Bartholomew, Francis, James, and Louis of Toulouse.

In Castelguinelli’s street is located the “Villa Casagrande” of Serristori. The Serristori were the most important family of Figline, and lived in this complex of buildings. Their construction dates back to the fourteenth century, by the will of a notary of Florentine origins. Here they met philosophers, artists, and scholars to discuss and exchange opinions. The Serristori family had an important collection of works of art and fine furnishings. Today, you can still visit the main floor of the building, where the collection is a fine show.

Presently, “Villa Casagrande Serristori” houses a hotel. You can visit the palace courtyard that opens with a double loggia right in front of a garden.